PFLAG needed a way to connect with people all over New York and raise awareness for the organization and its valuable services. We created the “Stay Close” campaign, a 100% pro bono effort that’s helped thousands of families keep relationships strong regardless of sexual orientation.

PFLAG (Parents, Families and Friends of Lesbians and Gays), a primarily heterosexual non-profit organization that helps people process the information that someone close to them is gay. Their mission is to facilitate stronger relationships between friends and family, regardless of sexual orientation, so bonds  remain as vital and rewarding as they should be. In 2002, although PFLAG NYC was the founding chapter and the organization had grown to include over 200,000 members in 500 affiliate chapters across the U.S., very few people outside the organization knew of its existence, much less those who would most benefit from PFLAG’s services. When we learned some of the statistics that result when family bonds break down for LGBT individuals, we resolved to help the New York chapter make its unique voice heard, and create a large-scale awareness campaign for the organization. 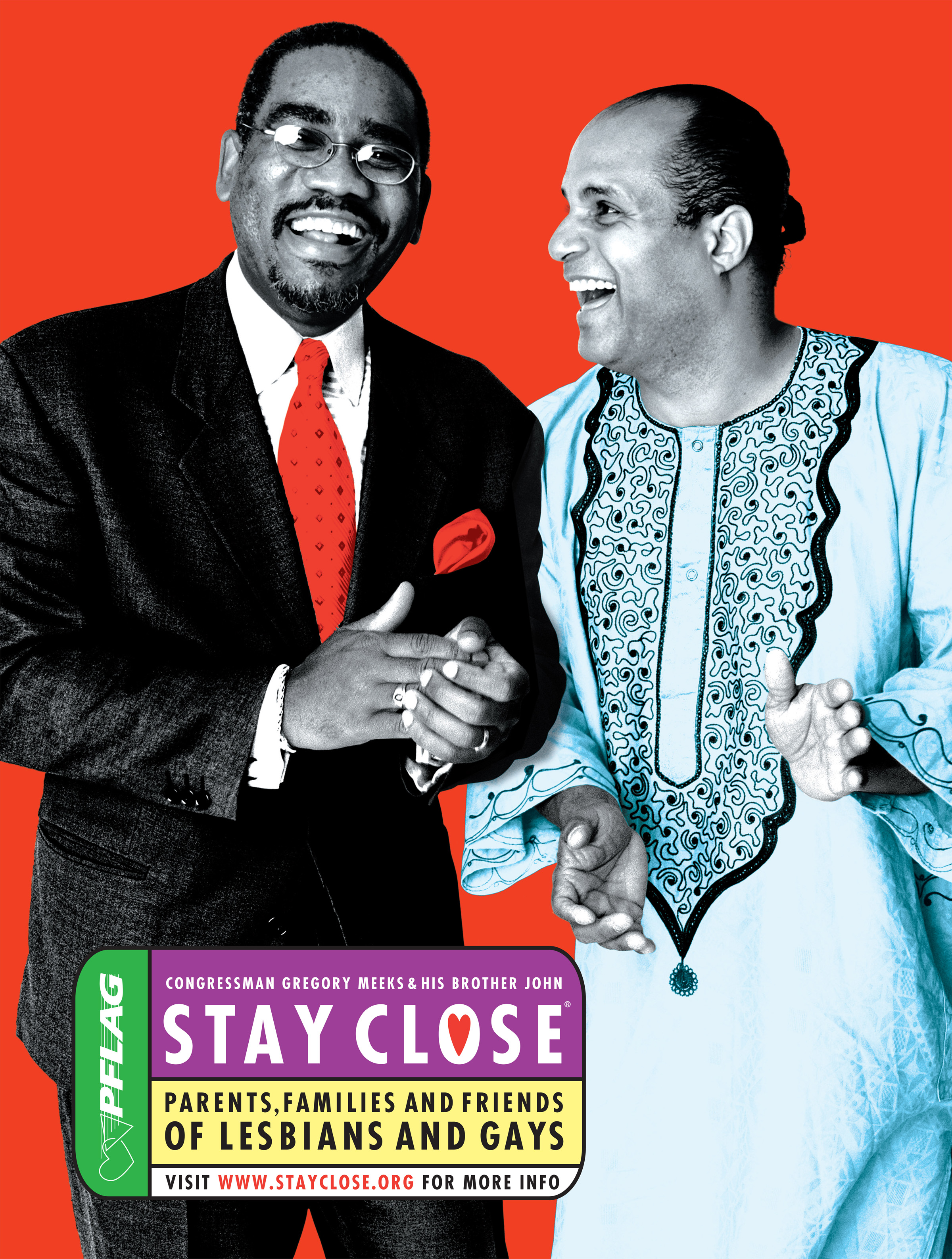 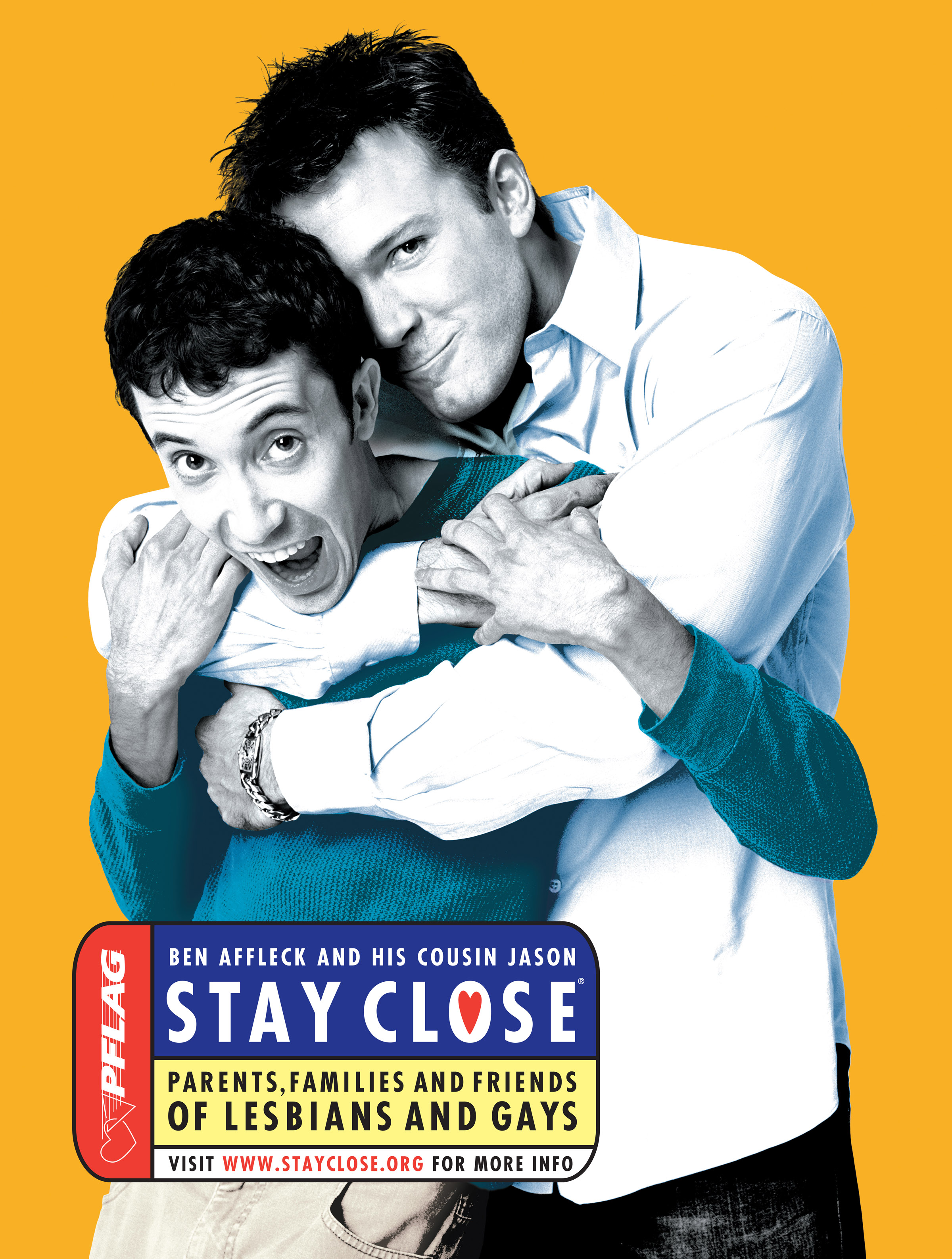 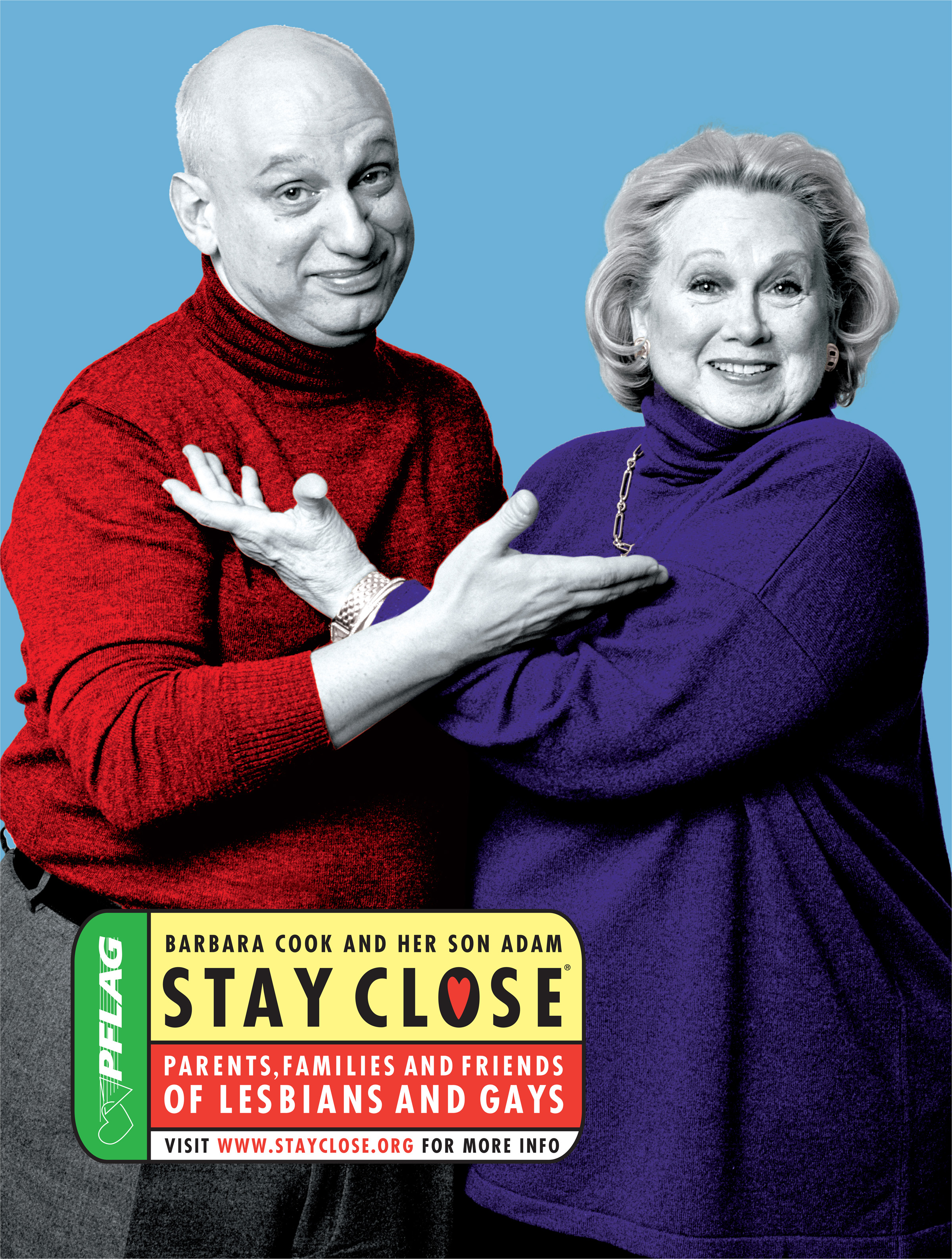 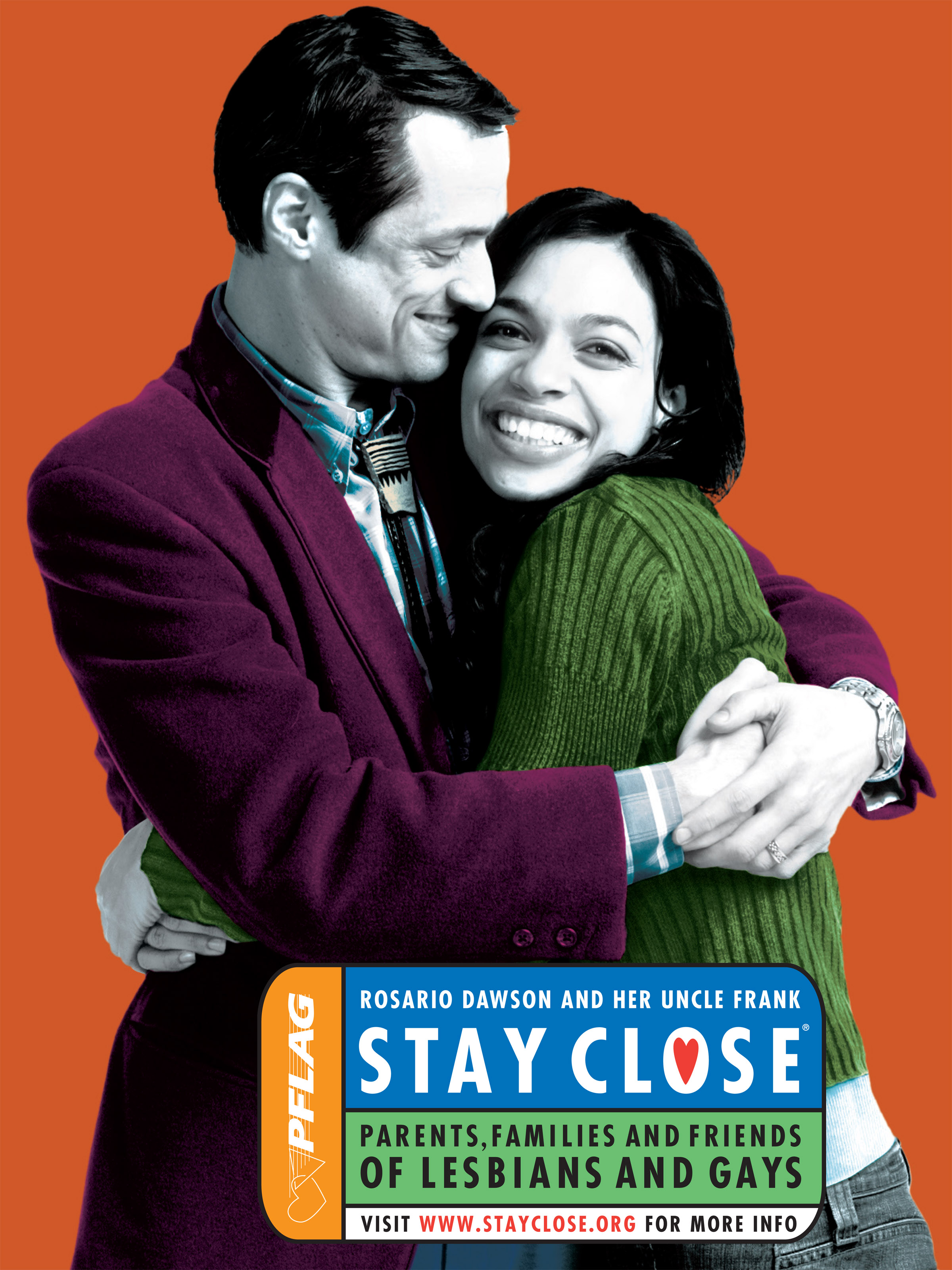 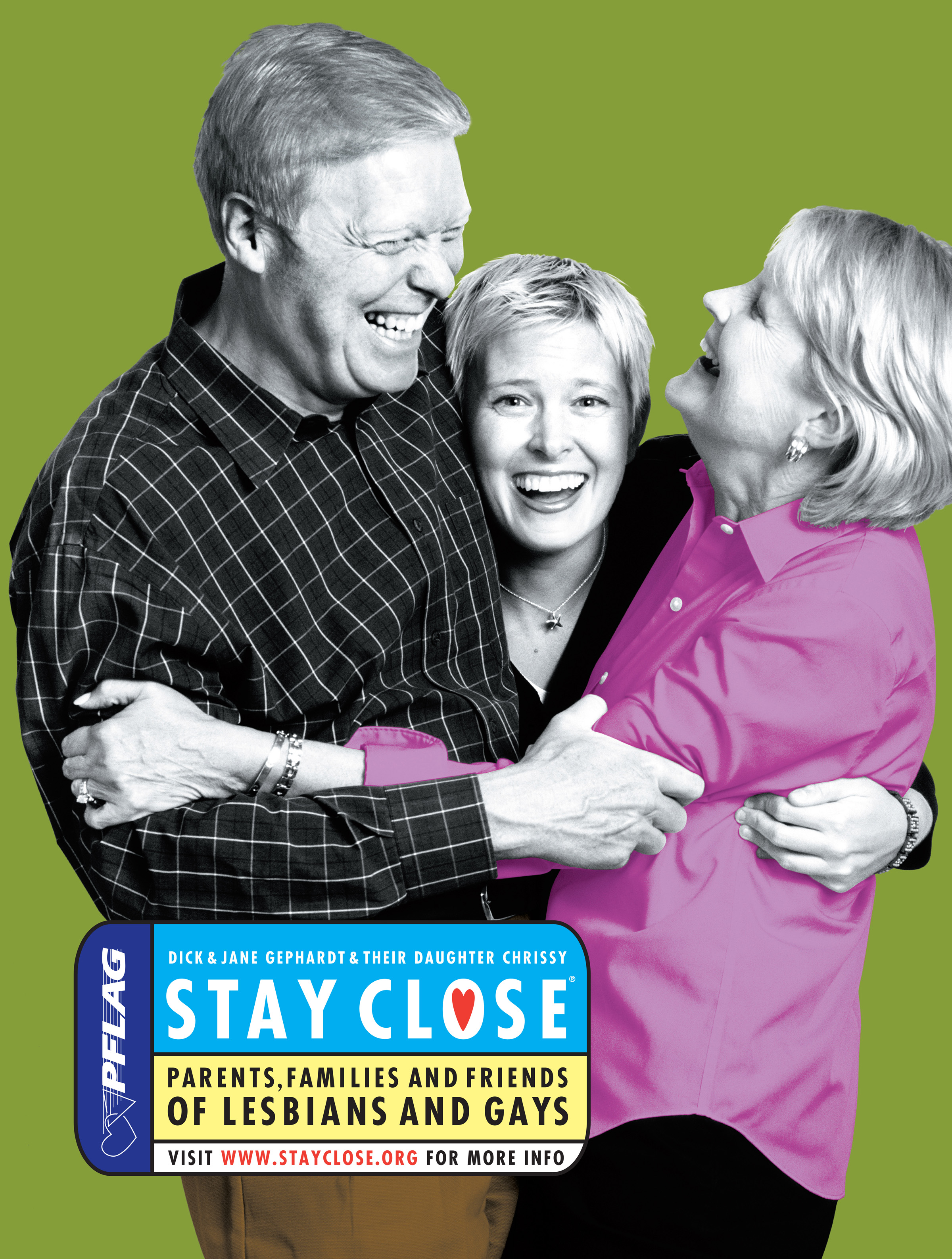 The campaign officially launched in 2005 via donated national print and OOH in New York City. Blanketing the NYC subway and bus transit, the “Stay Close” message connected with a diverse audience, and PFLAG was able to generate big buzz with New Yorkers, who immediately spread the word nationally via blogs, editorials, and word of mouth. 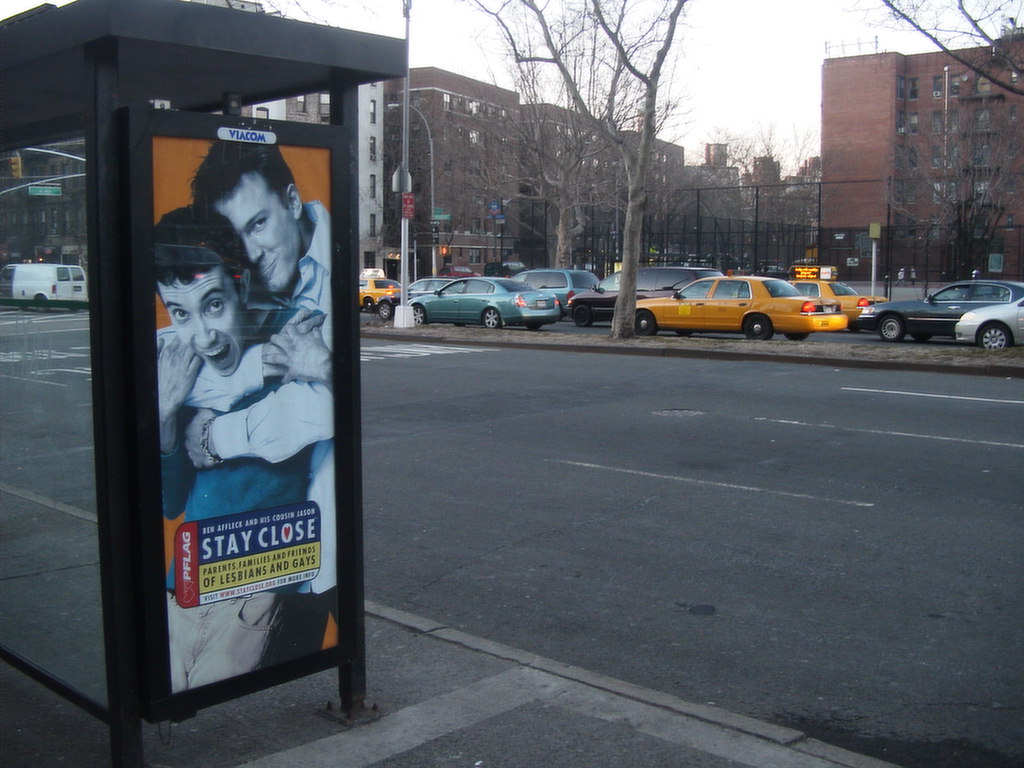 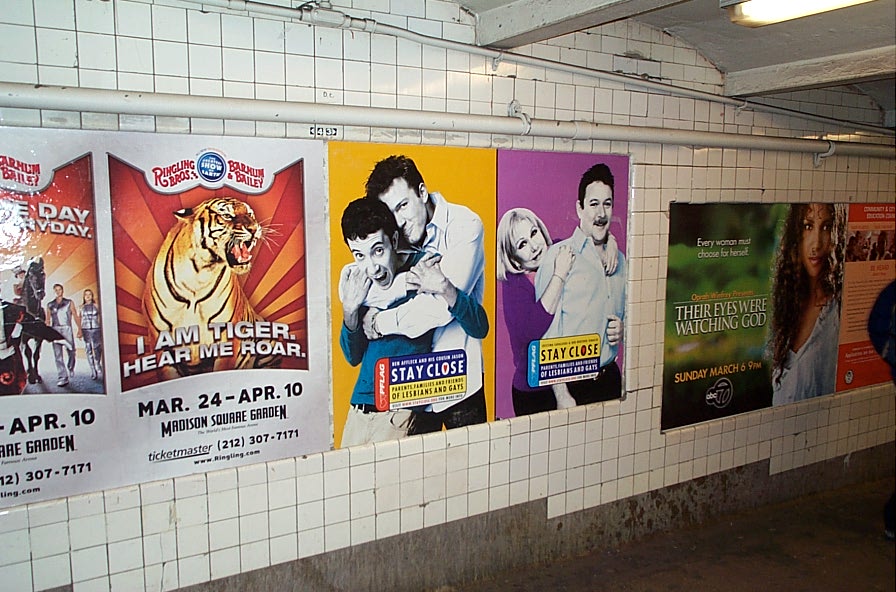 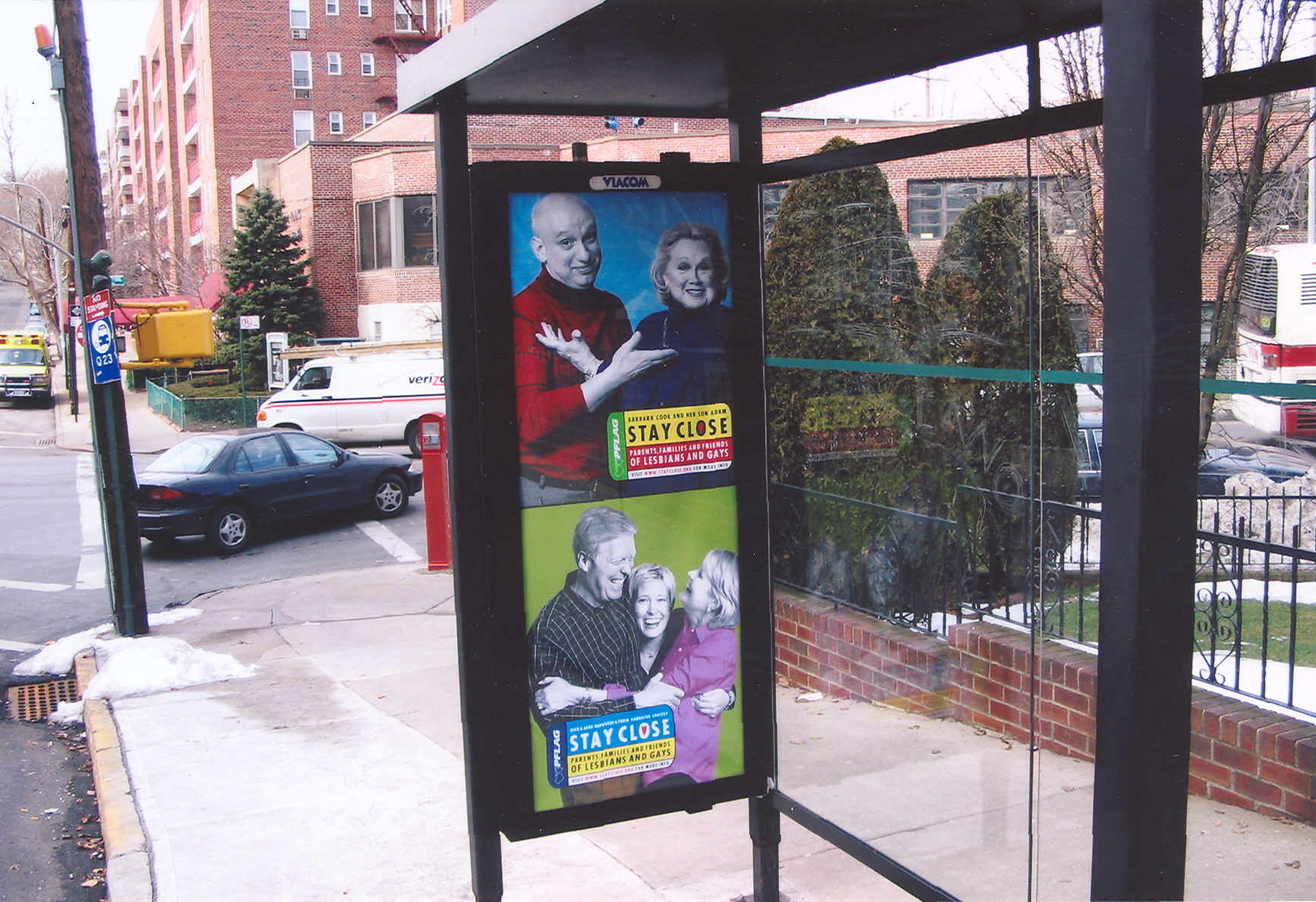 In parallel, the www.stayclose.org website enabled viewers to learn more about the organization, how to locate a nearby chapter and how to anonymously contact PFLAG volunteers. It also allowed them to find support and comfort by reading stories from other parents, friends and LGBT people in similar situations. 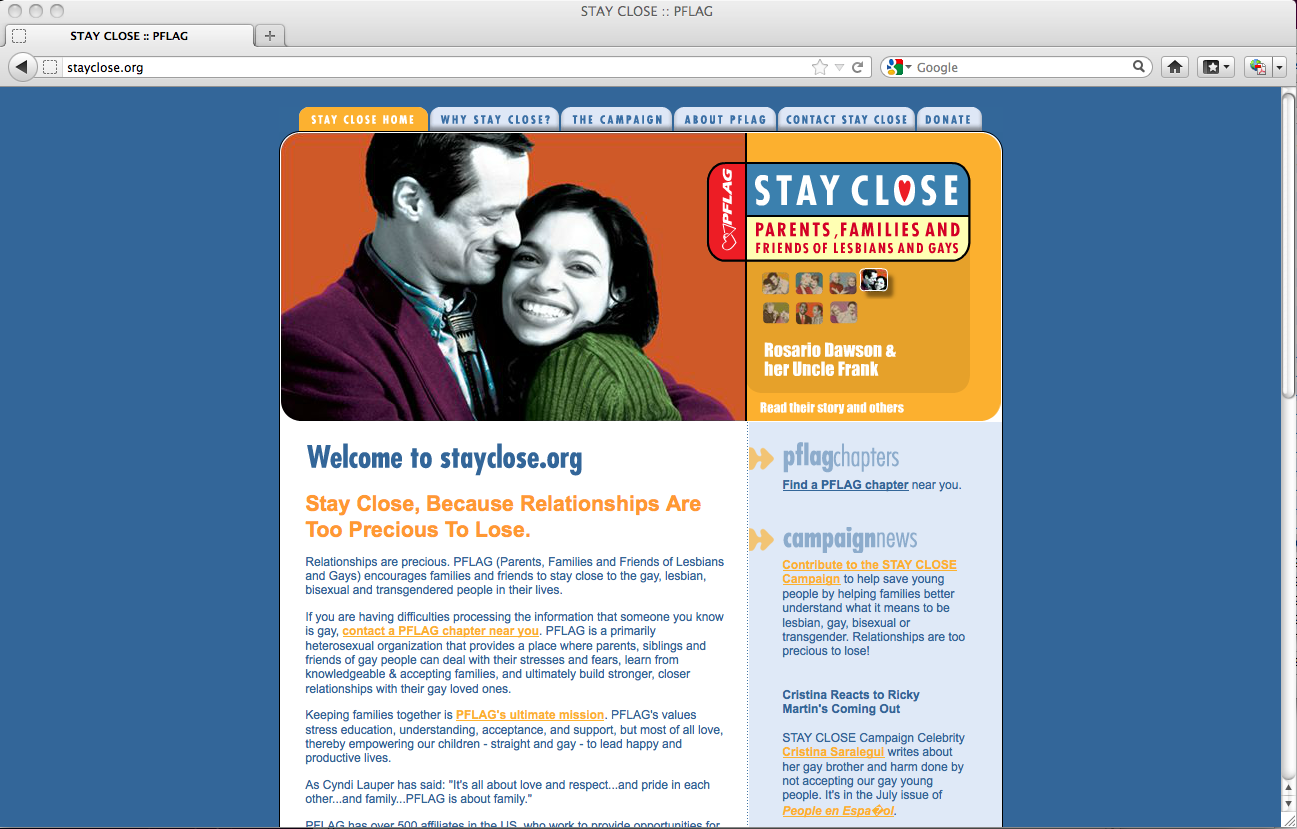 That same year, we orchestrated a “Portraits In The Park” event during the much-hyped Gates exhibit in Central Park. To further promote the “Stay Close” message, PFLAG volunteers approached New Yorkers and tourists alike and asked if they would pose with their favorite “Stay Close” ad in support of the campaign. The response on a frigid February day was overwhelmingly positive and served to further establish PFLAG in the community. 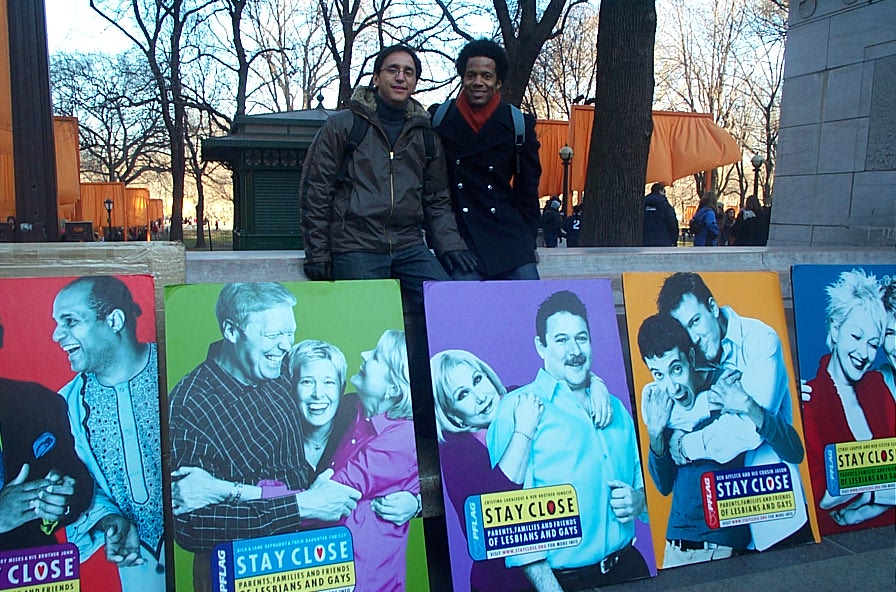 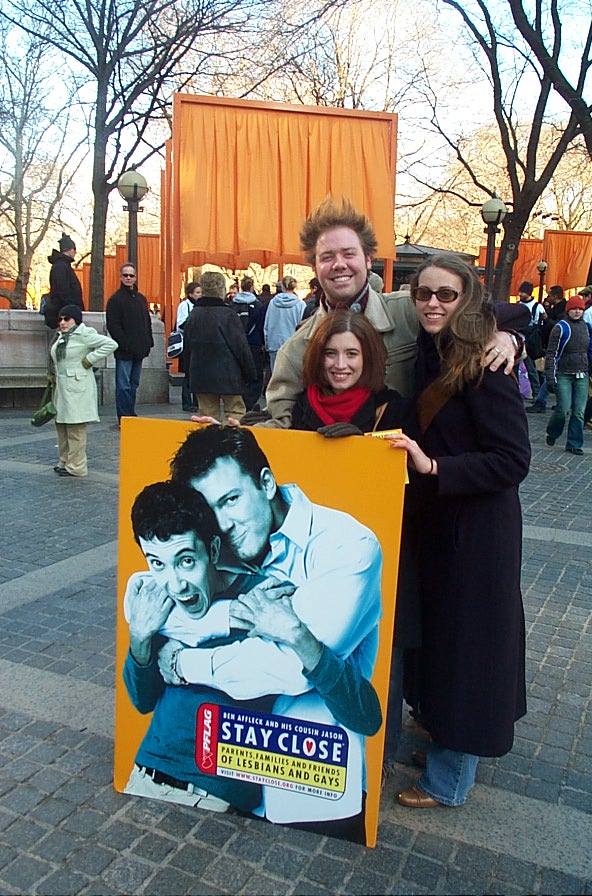 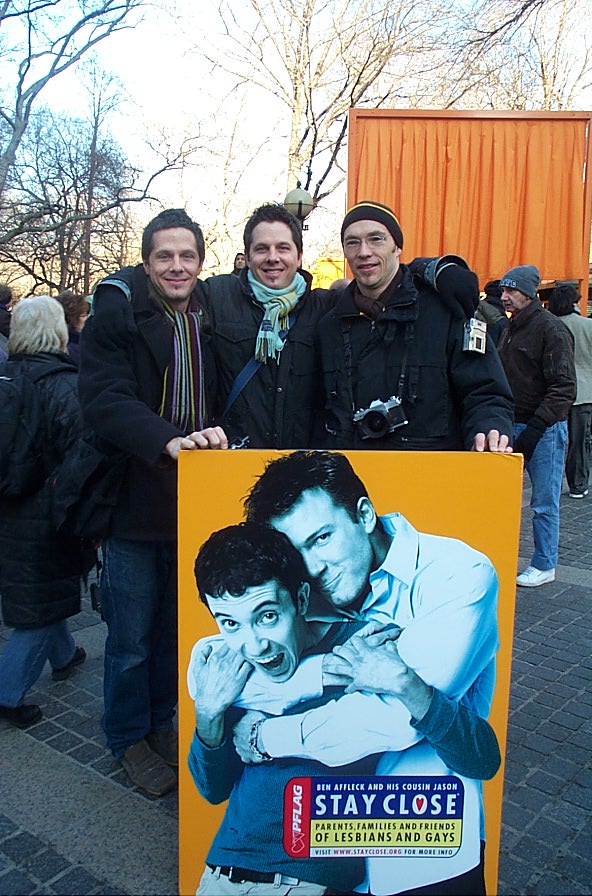 As momentum around the campaign started growing so did the funds and access to donated media space. PFLAG was able to secure airtime on 40 Time Warner Cable channels in the Tri-State area, on VH1 nationally, and on NYC radio for the month of March 2006.  We responded by organizing pro bono production resources and creating “Stay Close” spots for TV and radio.

At the same time, we developed additional print materials to help PFLAG take advantage of impromptu media placements and accommodate increased attendance at events such as their “Safe Schools” program. The campaign continued to grow with the development of a media kit, holiday cards, fundraising dinner invitations, web banners, cinema slides, postcards and other collateral.

To date, the “Stay Close” campaign has achieved over $2.5 million in pro bono placements in local and national media. It has drastically increased awareness of PFLAG in the community, increasing membership in the New York chapter and doubling invitations for PFLAG to speak at schools, businesses and political functions. PFLAG NYC received Proclamations from House of Representative and the Senate, and the Office of the Mayor declared October 10th PFLAG Day in recognition of their “Stay Close” efforts in the community. Since launch, attendance at the annual Awards Dinner and fundraising have steadily increased. And new celebrities continue to come into the fold in support of the campaign, with new ads scheduled for release in the Fall of 2012. 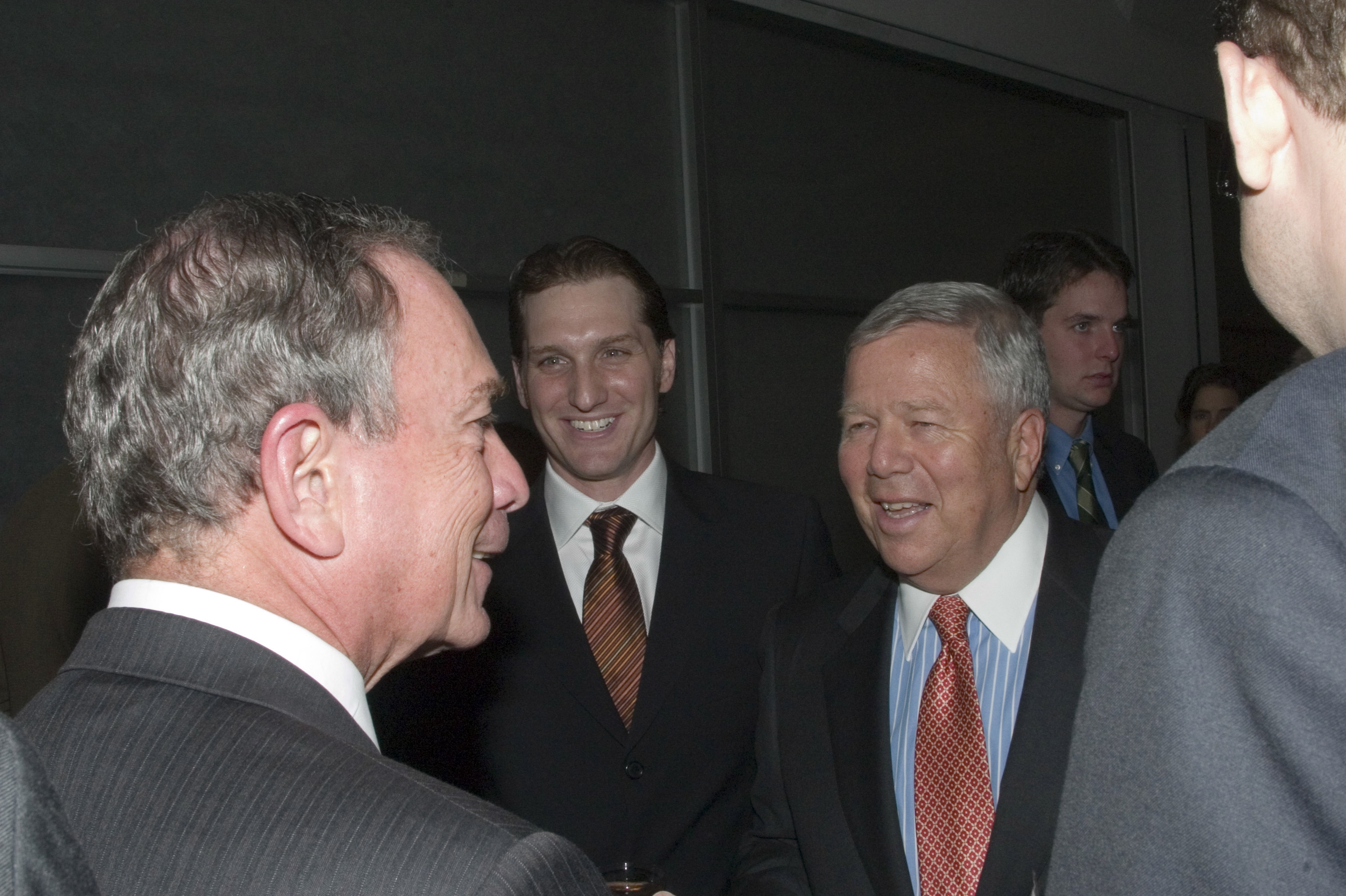 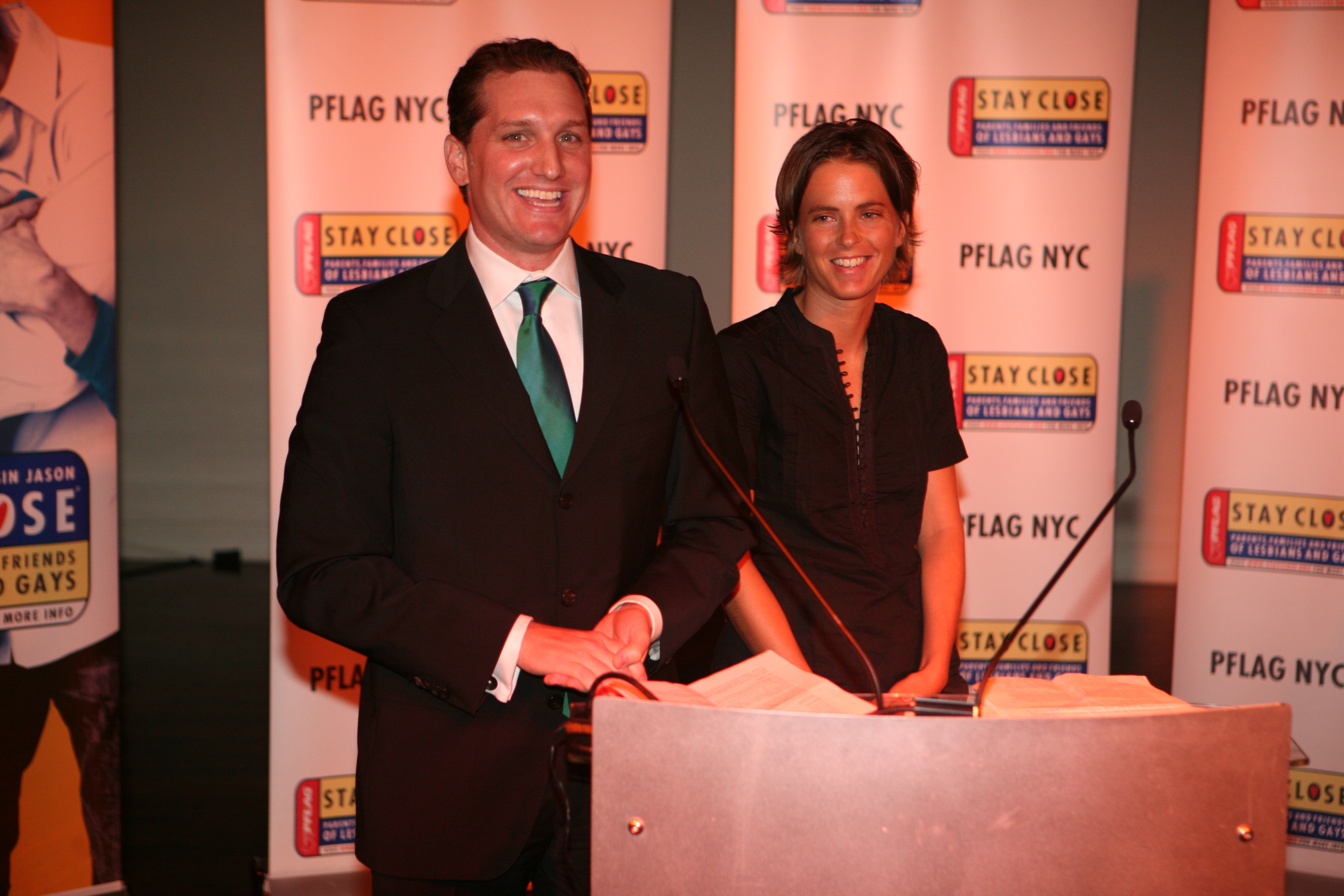 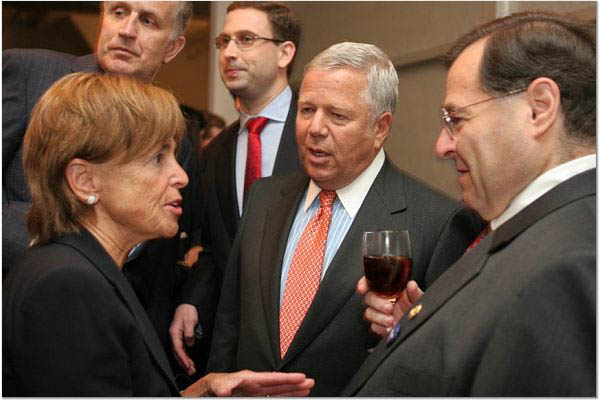 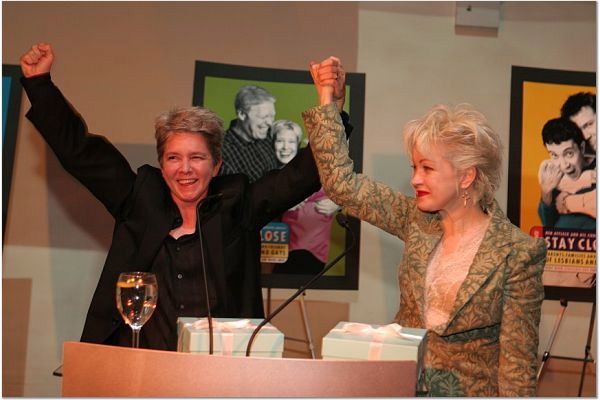